Philip Straw, D.C., who operates Optimal Health Straw Chiropractic with five offices in Southern California, aggressively advertises that he can help people who suffer from peripheral neuropathy. The clinic Web site states that his approach—which he calls “The Straw Protocol”—has four components: 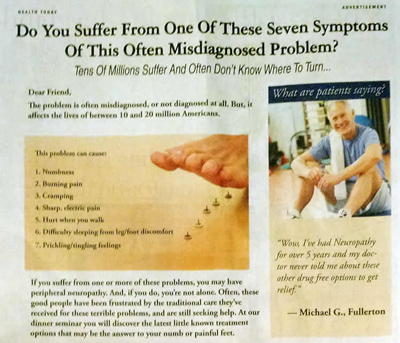 The Web site states that the treatment program typically entails three 1-hour treatment sessions per week for anywhere between four and 16 weeks and can cost from “a few thousand up to ten or fifteen-thousand dollars in severe cases.” The site’s “FAQ” page suggests that the Shaw Protocol is able to “regenerate peripheral nerves that have been affected by your neuropathy.” I can’t judge from a distance whether people Shaw treats experience significant pain relief, but I do not believe that light, vibrations, or dietary supplements can cause nerves to regenerate. William M. London, Ed.D., M.P.H., who has investigated Straw’s promotional activities, has posted a skeptical report of what he has seen.

In 2013, the Chiropractic Board of California cited Straw for misleading advertising and fined him $500. The citation reads:

The peripheral nervous system is the network of nerves that transmit information between the central nervous system (brain and spinal cord) and the rest of the body. Peripheral neuropathy is a group of more than 100 conditions conditions caused by damage to peripheral nerves. Standard medical treatments, which depend on the cause, are effective for some types. The National Institute of Neurological Disorders has published a fact sheet that describes the causes and treatments, many of which are outside of chiropractic’s scope. Shaw says he has helped more than 10,000 patients. However, if he wants the scientific community to believe his approach is effective, he should do controlled studies and publish his findings.