From the 1920s to the late 1960s, chiropractic organizations used posture pageants to draw media attention to their profession. Except for the emphasis on posture, the earlier ones were similar to other beauty contests of their day. 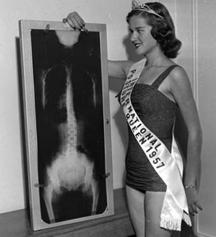 But in 1954, a chiropractor named Clair O’Dell suggested that the contest focus on the straightest spine as demonstrated by x-ray. The main score was for spine and body alignment with other points given for poise, beauty, and personality [1].

During the next few years, the National Chiropractic Association, International Chiropractors Association, and Canadian Chiropractic Association jointly administered a “posture week” project with a  “Posture Queen” contest throughout North America. To nominate a contestant, an individual chiropractor submitted a full-spine x-ray plus the contestant’s photograph. At state finals, judging was based half on spinal structure and half on spinal structure. At the height of their popularity, winners visited presidents, interviewed  on television shows, and were featured in newspapers, Time and Life magazines, and other publications [2].

Full-spine x-rays provide very little useful diagnostic information and expose patients to large amounts of radiation. Only a small percentage of chiropractors still use them. It was improper to expose young women to medically unnecessary radiation so they could compete in beauty contests.