I am a 40-year-old woman who was diagnosed with multiple sclerosis in 1994.

In 1998, I had a persistent dull ache in my hip sockets and, on the urging of a friend, went to see an iridologist at a “psychic fair.” This person accurately named so many of my known past health problems that when she said my hip ache could be cured by seeing a chiropractor, I decided to find one. Mind you I had spent my whole life totally opposed to chiropractors. Not for any particular reason, I just had a bad feeling about them. Anyway, on this woman’s urging I found one in the yellow pages and went. First he took a standing x-ray that made my spine look very crooked. Then he claimed he could cure MS.

The chiropractor required the x-ray — to be paid for in cash — before he would even look at me. He made a big production over how bad my spine looked in the x-ray and how he could straighten it and cure my MS if I would go through twelve treatments, one each day, excepting the weekend. He made it all very urgent and said I would get much worse, maybe even have to use a wheelchair if I did not take care of it right away. Mind you, I went in for a dull ache in the hip socket! He found out about the MS through the questionnaire I had to fill out when I arrived. I told him it was pretty much a non-issue. He then took the x-ray and the rest happened.

He started his manipulation and the did something to my lower back that made me scream. (I had my son without medication of any kind, and was ripped up badly, but without uttering one sound, my pain threshold was that high.) I felt something tear, but he would not stop and said that if I endured twelve treatments, I would be cured. Like an idiot I had three treatments, each so bad that I could not even stand unaided by the third.

A the time I sought treatment, my MS was not causing problems and has rarely caused problems since. The issue to me was the dull hip ache which I felt was an annoyance. I sort of felt that if both the ache and MS were kept at bay “there would be nothing stopping me” professionally and personally. I was looking forward to a happy productive life. He destroyed that chance forever. He also used one of those “vertabra kicking machines” and said my spine immediately went back into a twisted position. It was excruciatingly painful and the last time it never eased up.

To make a long story short, I have two torn and ruptured disks. My doctors say they can not fix them and that their condition is progressive. I live in so much pain, and am on two different schedule two narcotics 24 hours a day. The drugs have changed me and the constant pain I now endure has made my life unbearable. I think of suicide several times a day but because of my religious beliefs haven’t acted on them. My family and friends slowly drifted away. I am alone and close to being homeless, and the costs of my drugs alone have nearly bankrupted me.

All of this because of a chiropractor. The dull hip ache was livable. This hellish half-life I would not wish on my worst enemy. Why I ignored my own inner warning is beyond me, perhaps it is because I so wanted to be rid of the MS. I was stunned to receive a Birthday postcard from the Chiropractor after two years of total silence from his office. It added insult to injury. Had I realized just how bad things were going to get, I think I would have sued the chiropractor. It is too late now. 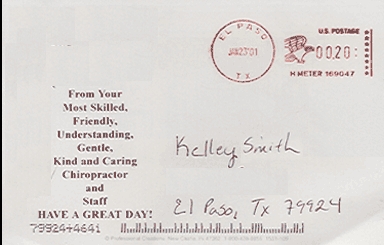