Trump University—also known as the Trump Wealth Institute and Trump Entrepreneur Initiative LLC—was an American company that ran a real estate training program from 2005 until 2010. It was owned and operated by The Trump Organization.

In 2016, New York Attorney General Eric Schneiderman announced that Donald J. Trump had agreed to settle three lawsuits which charged that he and his associates had misrepresented the nature and value of real estate courses offered by Trump University. The settlement includes payment of $21 million to settle two California class-action suits and $4 million to New York State to be used to (a) reimburse former students who were not parties to the class-action suits and (b) if funds remain, to pay up to $1 million for costs and/or penalties for Trump University’s failure to obtain a license from the New York’s Education Department. Trump admitted no liability, but Schneiderman’s press release minced no words:

In 2013, my office sued Donald Trump for swindling thousands of innocent Americans out of ​millions of dollars through a scheme known as Trump University. Donald Trump fought us every step of the way, filing baseless charges and fruitless appeals and refusing to settle for even modest amounts of compensation for the victims of his phony university. Today, that all changes. Today’s $25 million settlement agreement is a stunning reversal by Donald Trump and a major victory for the over 6,000 victims of his fraudulent university. 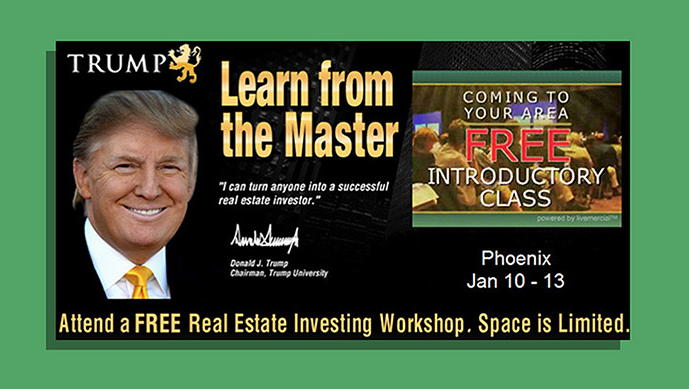 The third amended complaint in the California case brought by Sonny Low included these allegations against Trump University:

The class action plaintiffs were represented by the law firm of Robbins Geller. Although the firm was entitled to collect millions of dollars for its work, it waived attorneys fees to ensure the maximum possible recovery for the former students. After the agreement was signed, one former student objected and filed an appeal that delayed execution of the settlement until 2018, when the appeal was denied.