To reach an audience of 50 million people, it took radio 38 years and television 13 years, but it only took the Internet under 4 years.1 Facebook took only 8 years to reach more than 1 billion users, and Twitter took just 6 years to reach slightly under one-half billion users.2-4 In the United States alone, Facebook and Twitter have 166 million and 140 million users, respectively. 3,4 The reach of the Internet and social media is unprecedented and almost unlimited.

According to the Pew Research Center, 97 percent of Americans 18–29 years old and 87 percent of adults over 18 use the Internet, with 72 percent of Internet users in 2013 utilizing it to look for health information.5,6 Social media is used by 73 percent of adult American Internet users across the majority of all races, genders, income and education levels, geographic locations, and age groups, the only exception being for those over 65 (46 percent).7 Although community water fluoridation is a public health measure recognized by numerous reliable medical, dental, and health organizations as being safe and effective, most of the Internet and social media depict CWF negatively. Currently, more than 210 million Americans—about 74 percent of the population on a public water supply—enjoy the health and economic benefits from CWF.8 However, new generations of Americans and the general public are being misinformed on the Internet and social media about the benefits and safety of this proven public health measure. Anti-CWF activities online can potentially impact the continuation and implementation of CWF.

Monthly website traffic to major CWF websites was determined from June 2011 to May 2012. Facebook, Twitter, and YouTube fluoridation activity was categorized as pro- or anti-CWF, and Twitter’s anti-CWF “tweets” were further categorized by the argument used against CWF. (See Figure 1.) 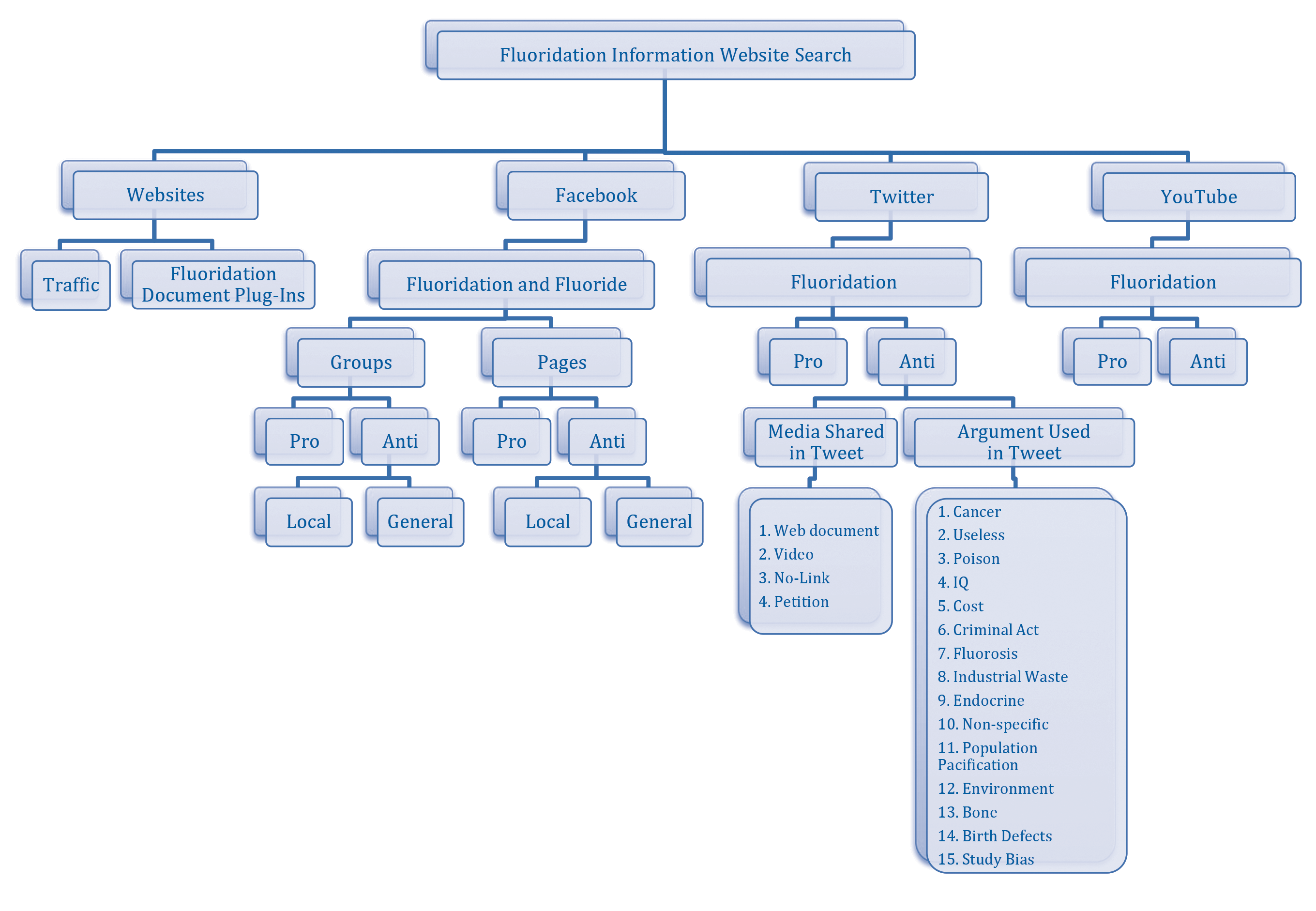 Fluoridation Information on Facebook
A cross-sectional search query of Facebook “Pages” and “Groups” was performed on April 3, 2012, using the search terms “fluoride” and “fluoridation.” For each search term, the first 50 Groups and the first 50 Pages relevant to CWF were recorded as either pro- or anti-CWF and tested for statistically significant differences using a chi-square test of independence.

Fluoridation Information on Twitter
From March 1 to 14, 2012, and April 1 to 14, 2012, a search query of Twitter was conducted using the term “fluoridation.” Data were collected from the same two time periods for two consecutive months to limit potential variation between months. The data set, which met the search requirements and relevance to CWF, were categorized as pro- or anti-fluoridation. The results were analyzed using a z-test. The tweets were then categorized into 15 mutually exclusive subject areas by the anti-fluoridation argument cited. The categories were: Cancer, Useless, Poison, IQ, Cost, Criminal Act, Fluorosis, Industrial Waste, Endocrine, Non-specific, Population Pacification, Environment, Bone, Birth Defects, and Study Bias (Flawed/favoring fluoride).

Fluoridation Information on YouTube
On April 3, 2012, a search query using the term “fluoridation” was conducted on YouTube. The resulting videos were categorized as pro- or anti-CWF and tested for a statistically significant difference using the chi-square test of independence.

Figure 2. Fluoridation Website Traffic by Number of Page Views Per Month, June 2011 to May 2012 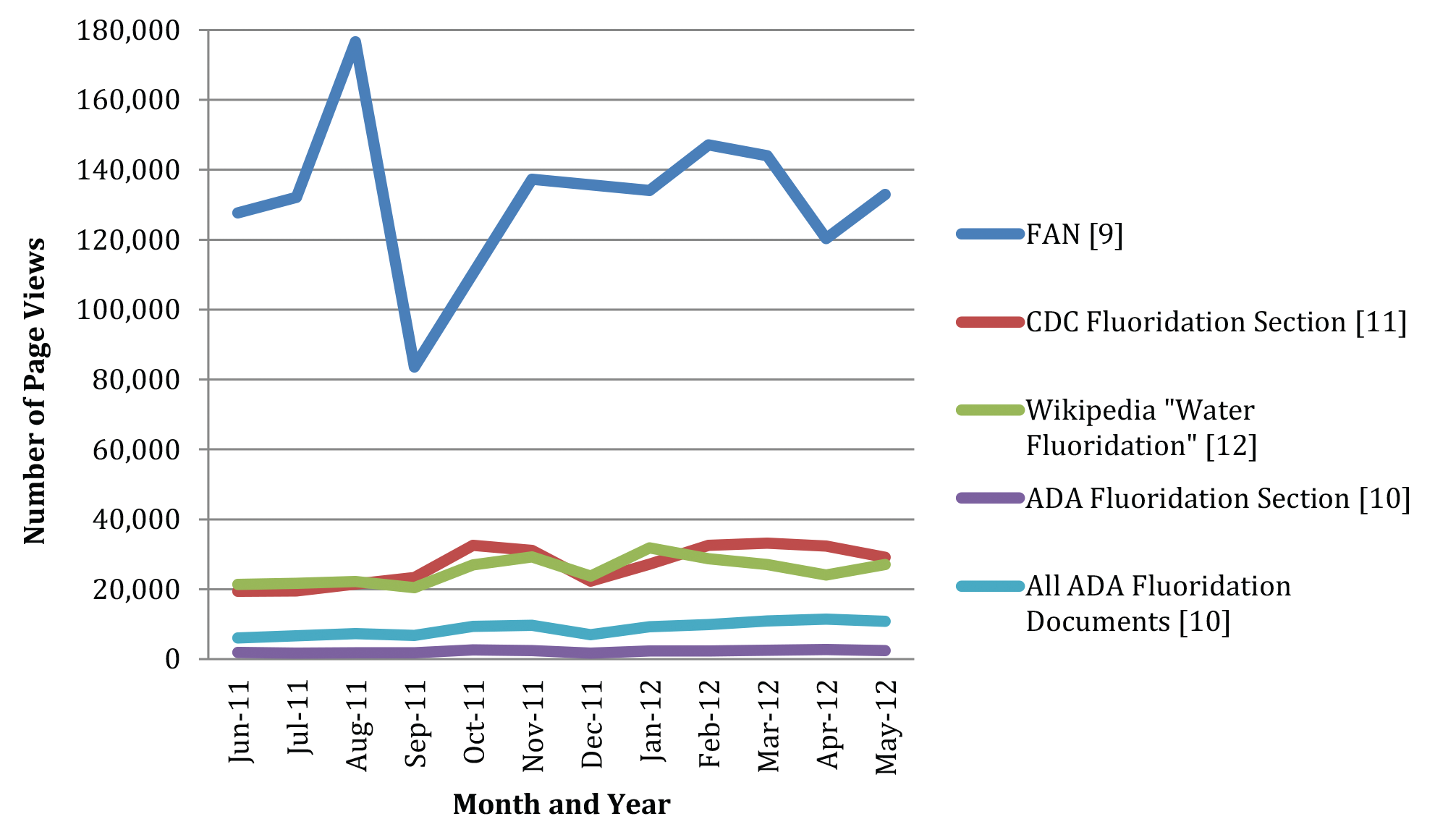 Comparing the website traffic of informative CWF websites reveals much greater anti-CWF dominance on the Internet. Website traffic is indicative of where people search for CWF information, and which tends to contain static content, whereas social media provides relatively more recent information and is an interactive resource.

Twitter and Fluoridation
A Twitter search query was conducted from March 1 to 14, 2012, and from April 1 to 14, 2012, using the search term “fluoridation” to determine the general attitude toward CWF on Twitter. The tweets retrieved were first grouped as pro- or anti-CWF (see Table 2) and then by anti-CWF argument used (see Figure 3). 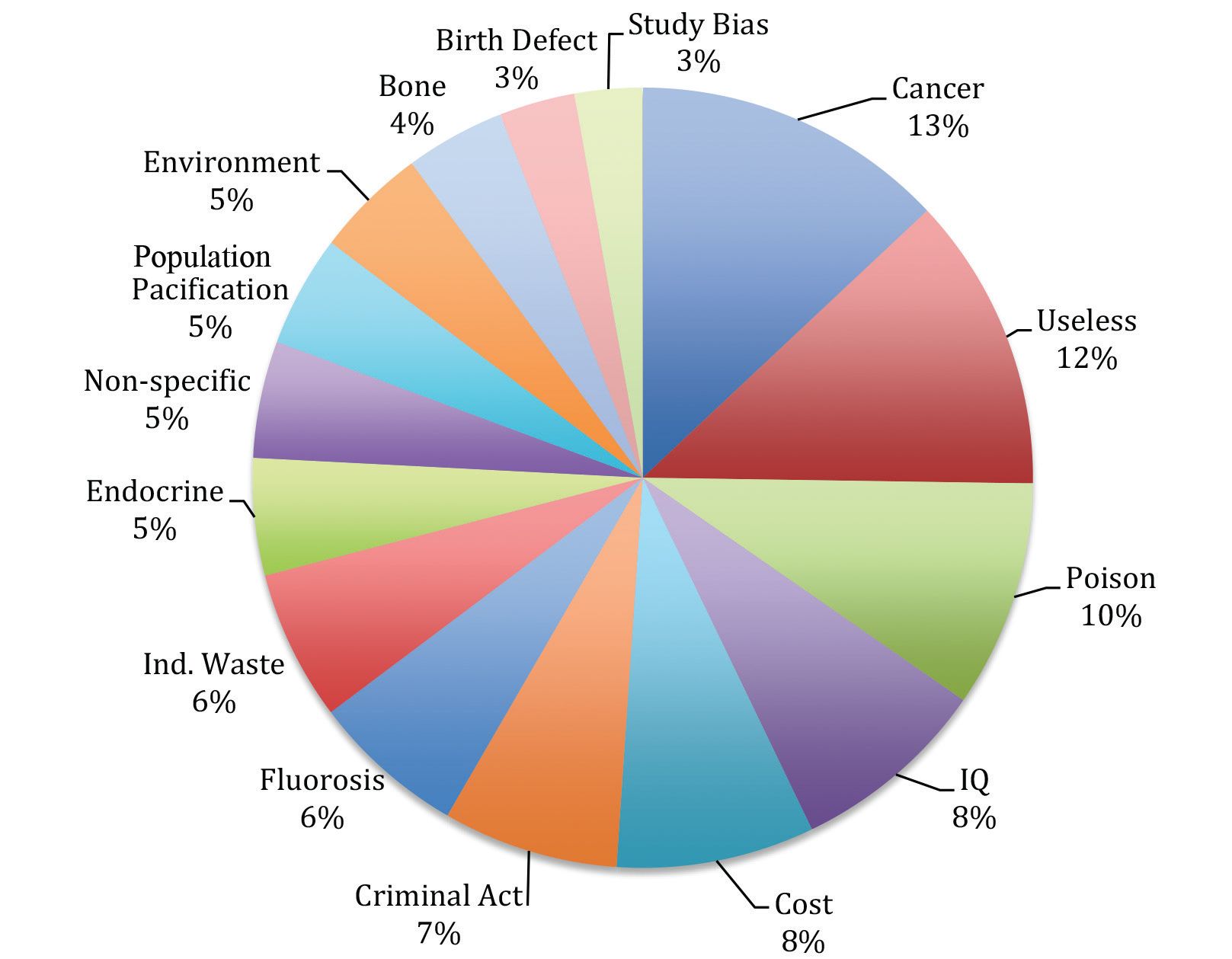 The anti-CWF tweets were further grouped by the argument used against CWF. (See Figure 3.) “Cancer” was the most frequently cited argument (13 percent), followed by “Useless” (12 percent), and “Poison” (10 percent). Considering that cancer is the second most common leading cause of death, it is not surprising that it is used so often in anti-CWF arguments.13

YouTube and Fluoridation
Of the three social media outlets, YouTube had the largest pro- and anti-CWF discrepancy. On April 1, 2012, a search query of “fluoridation” resulted in 3,690 videos. Not one of the videos retrieved was pro-CWF and 3,645 (99 percent) were anti-CWF. The 45 remaining videos were not related to community water fluoridation. Because no videos retrieved were pro-CWF, a chi-squared test was not performed.

Anti-CWF websites are visited 5 to 60 times more frequently than pro-CWF websites, which means the public retrieves most of its online information about CWF on anti-CWF websites. Regarding social media, all Facebook Groups and Pages were against CWF, the majority of tweets on Twitter were anti-CWF, and the majority of YouTube videos were anti-CWF, thereby demonstrating that anti-CWF organizations use networking on social media much more often and more effectively than do pro-CWF organizations. How this translates to implementation or discontinuation of CWF is unknown. During the study period in March 2012 when there was a favorable article on CWF in a reputable newspaper (i.e., the New York Times), there were more positive tweets for CWF.

More people are now using social media to convey personal health information and sentiments, which can significantly influence others on a daily basis.14-151Health professionals must recognize this and adapt to social networking to not only better inform the public about CWF, but also to collect data and study attitudes about CWF. In addition, it is the responsibility of public health professionals to adapt to new forms of media to educate the public to improve community health at the national, state, and local levels. Since the study was done, more reputable fluoridation information organizations, including the CDC and ADA, are using social media to convey pro-CWF information.

The goal of this article is to bring awareness to the dental, health, and public health professions to show that the Internet and social media are used much more effectively by anti-CWF organizations than by pro-CWF organizations. Hopefully, this will provide an impetus for health professionals providing fluoridation information to become more effective at optimizing their website presence on the Internet and in using social media. Additionally, proponents of fluoridation need to use social media resources to spread the word of upcoming fluoridation events, news, and reliable information to social media users. Individual dental practitioners and health providers also need to educate their patients, as well as their legislators and other policy makers, about fluoridation so they will not be misinformed by anti-fluoridation information.16

Mr. Mertz is a dental student at the Boston University Henry M. Goldman School of Dental Medicine. Dr. Allukian is a nationally recognized expert on fluoridation and dental public health. He is the president of the Massachusetts Coalition for Oral Health and was the dental director for the City of Boston for 34 years. He is also a past president of the American Public Health Association and a member of the Institute of Medicine, National Academy of Sciences. The full citation for this article is Mertz A. Allukian M. Community water fluoridation on the Internet and social media. J Mass Dent Soc. 2014 Summer;63(2):32-6.