The Healy is a medical device that can be clipped to the users clothing. It supposedly interacts with the body through electrodes that are worn on the wrist, clipped to the ear, or temporarily attached to the skin with adhesive. Its operation is controlled via Bluetooth by a software application that is installed on a smartphone. In 2020, Healy World announced that it would begin multilevel marketing of Healy devices in the United States [1].

Bioresonance therapy is based on notions that (a) every cell in the body has its own electromagnetic frequency and that (b) diseases can be cured by correcting abnormal frequencies by various means. The idea that diseases could be cured by radiofrequency energy was originally exploited by Albert Abrams, M.D., (1864-1924) whom the American Medical Association labeled the “dean of gadget quacks.” In the 1920s and 1930s, Royal Rife claimed that his devices to have developed a device that could destroy microorganisms by vibrating at their “resonant frequency.” Rife derivatives are still marketed.

Proponents attribute the development of bioresonance therapy to Franz Morell, a German physician who spent years investigating the use of electroacupuncture devices and helped Hans Brügemann develop one called the BICOM [3]. A brochure from from BICOM’s manufacturer states that Brügemann coined the term “bioresonance therapy” in 1987 to describe the BICOM’s action [2]. Professor Edzard Ernst believes that Brügemann and subsequent bioresonance promoters have used “pseudo-scientific language . . . . as an attempt to present nonsense as science.” [3]. A recent study of two current BICOM equivalents found that they (a) failed to diagnose serious diseases in two seriously ill patients, (b) produced a clean bill of health for a corpse, (c) diagnosed a host of nonexistent health risks nine healthy volunteers, (d) generated no real differences between a wet towel and the volunteers, and (e) had wildly variable results with repeated tests of the wet towel and liver pate [4].

The Healy is said tio be a portable descendant of the BICOM device. The Healy GmbH Web site attributes its development to Marcus Schmieke and Nuno Nina:

Marcus Schmieke, born 1966, is the inventor and developer of the Healy™ and TimeWaver® products. For many years Marcus had been thinking about how to let everyone benefit from the possibilities of the TimeWaver technology in a compact and simple way. What he had in mind was a device that everyone could use every day, something compact, simple and practical. A little companion that watches over our health and can help in an innovative way to prevent problems and support healing.

Nuno Nina is a Portuguese researcher and holistic healer. Nuno runs seven private clinics, most of them in Portugal. His field of work is mainly frequency applications and cell biology. Nuno’s experience with thousands of clients has enabled him to compile the theories and findings from his research in the form of a collection of 144,000 so-called “Gold Frequencies.” When he first came into contact with the TimeWaver technology years ago, he immediately suggested combining it with the possibilities of frequency therapy to create something greater than the sum of its parts [5].

The human body is made up of 100 trillion cells, each requiring healthy cell voltage to stay alive. Quantum physics teaches us there’s no difference between energy and matter. Therefore, we are nothing but energy. Quantum physics teaches us everything within us is the result of motion-creating resonance. The resonance is important to understanding how subtle energy directs and maintains health and wellness in human beings.

Imagine a portable wearable technology designed for total heath, inside and out to assist with energetic imbalances by directing cell communication and increasing cellular energy (ATP) by 500%. By doing so, we can bring the body back to homeostasis (balance). Our cells constantly communicate through resonant frequency much like tuning to the precise channel on your radio or TV. The difference in tuning the station to 102.3 or 102.4 is the difference in a clear signal vs static (signal disruptor). The magic is in the resonance.

Like anything, your cells act as transmitters and receivers. How your cells transmit and receive communication is imperative and can directly impact your health through their signal calling. In the same way, you can disrupt a good signal through poor unhealthy lifestyle, environmental factors etc. you can intentionally disrupt a bad signal (symptomatic poor health). Focusing on healthy frequency communication between cell function can impact your health, vitality, and your brain in ways you can’t possibly imagine [6].

Through the science of quantum physics, the Healy can measure your individual frequency via a quantum sensor – then deliver back to you customized and specific frequencies to realign your cellular, emotional and/or energy centers back into bioenergetic balance. To put it more simply, Healy can talk directly to your cellular energy. It can ask your cells what they need to heal and then deliver the exact frequencies your cells asks for—or “resonates with”—to heal [7].

Stay connected to the Cloud via your smartphone. Healy has access to thousands of  therapists and clinicians who can supply you with the optimal frequencies. Now possible for everyone. We believe that all this is just the beginning of a new era—an era in which the bioenergetic regeneration of cells will be just as important to humans as a healthy diet and sufficient exercise today [8].

A “Healy Programs” brochure promises more than a hundred benefits, including:

Most of Healy’s marketing materials carry a disclaimer to the effect that “Healy and its applications are not acknowledged by orthodox medicine due to a lack of scientific proof in accordance with scientific standards.” It should be noted, however, that claims for the Healy are not merely unproven. There is no logical reason to believe that the  “frequencies” proponents describe are actual physical forces. But that doesn’t stop them from suggesting that they provide great health benefits.

Devices with 510(k) clearance from the FDA can be legally marketed in the United States for the purposes for which they are cleared. To obtain such clearance, the manufacturer must show that the devices is substantially similar to a device that the FDA has previously cleared or approved [10]. It is not necessary to prove that the device works. In 2019, the Healy received FDA 510(k) clearance as a Class 2 medical device:

The 510(k) application described it as substantially similar to Omron’s Avail, which is a respectable transcutaneous electrical nerve stimulation (TENS) device that is cleared for the symptomatic relief of various types of pain. TENS devices are postulated to relieve pain by releasing endorphins and/or blocking the transmission of pain through local nerves [12]. If the Healy can deliver electric currents that enable it to function like a TENS device, it would be legally marketable for that purpose. However, it is not cleared for any of the uses related to “bioresonance” that dominate the company’s marketing materials. Any claims that the Healy can be used to prevent, mitigate, cure or treat a disease would be illegal.

Healy might argue that its claims about frequencies and “energetic balance”  should not be regarded as medical claims. In fact, the Healy World Web site states that “Healy also has non-medical applications that use individualized frequencies to help balance your mind and body and relieve stress in support of wellness but not for the treatment of disease.” However, intended use is determined by the context in which a claim is made. The courts have concluded that the use of “artful language” does not change the significance of illegal acts that amount to the same thing [13,14]. If asked, I believe the courts would conclude that Healy’s claims that mention organs or diseases are medical claims that are illegal without FDA approval. Moreover, the Federal Trade Commission Act requires advertising to be truthful and not misleading—and the FTC, if it acts, generally requires that health-related claims be supported by adequate scientific evidence (typically at least two controlled clinical trials), which Healy admits it does not have. 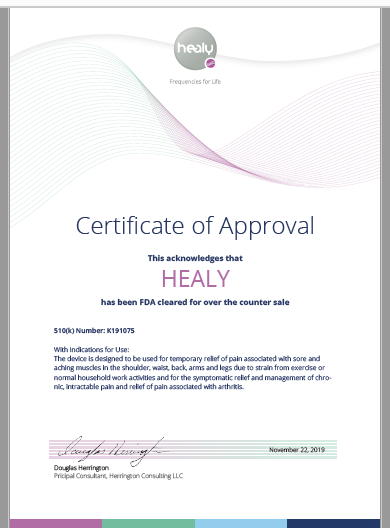 Several sites are claiming that the Healy is FDA-approved. That is not correct. Approval requires evidence of safety and effectiveness demonstrated by clinical trials. The people claiming approval may not understand the difference between approval and clearance. Or maybe they were misled by the “Certificate of Approval” issued by Harrington Consulting, the company that submitted Healy’s 510(k)  application. The certificate accurately describes the clearance, but the word “approval” might mislead some people.

Healy devices are claimed to help a wide spectrum of health problems. Their use is based on notions that may sound scientific but lack real scientific support. The FDA has cleared Healy devices for sale in the United States for temporary relief of pain, but claims made for them go far beyond what the clearance allows. Healy’s marketers even admit that there is no scientific proof that they work as advertised.