VoiceBio—also called Voice BioAnalysis or BioHarmonics—is based on the idea that internal organs communicate with each other through sound waves, with each organ vibrating at certain frequencies, and with organ dysfunction being detectable by a computer-assisted analysis of the patient’s voice. The VoiceBio apparatus consists of a microphone connected to a computer as shown in the picture to the right. The technique was developed in the mid-1990s by Kae Thompson-Liu, who describes herself as a naturopath and said in a radio broadcast that she devised the methodology over a 4-month period in which she wrote down what happened during dreams every night about helping friends [1]. Thompson-Liu is doing business as VIBEprints Corporation (originally called Sound Support Network) in Hardy, Virginia. Her Web site states: 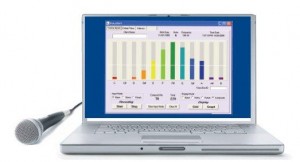 What can VoiceBio™ do? Shed light on a nagging health problem that just can’t be solved . . . warn of a predisposition toward a serious illness to allow time for preventative efforts . . . help determine the ideal remedy for a physical or emotional problem… explain the energetics behind “inherited” health conditions . . . reveal how emotions can fill in for physically deteriorated organs and systems . . . explain the dynamic present in addictive/abusive relationships.. provide the key to shifting ingrained energetic patterns . . . and so much more! [2]

Each organ has its own keynote frequency that resonates to the particular nutrients, minerals and sound vibration required for function. As an example, the colon vibrates to the note of B, while the liver vibrates to the note of G. Fortunately, for our sanity, the frequencies of our organs and systems function outside the range of human hearing. There are in all, 12 keynote frequencies present in the human body. . . . Through through the technology of VoiceBio,, the independent frequencies can be captured, translated and sorted onto a voice print chart, giving a highly accurate indication of physical function. . . .

An assessment of the heavy and weak areas of a voice print can act as a guide to improved health, regeneration and increased energy. A voice print can literally point out exactly not only why the door is locked, but also which key is needed to “unlock the door.” [3]

The Web site describes a typical session this way:

When this data is compiled we can analyze it and offer some suggestions of possible diseases or conditions that might be affecting the vocal counts, but we are not trained physicians. We suggest a client take a closer look at the results of the vocal test and consider professional medical assessment.

Our vocal tests are not considered by the medical industry to be “scientific.” And yet, based on hard scientific data, it is generally accepted that the body produces sound frequencies that identify each organ, type of tissue, and type of function. This information is exactly the same in each body. The function of the brain is the same in all beings. When our note counts reveal a weakness in one area, while we are not trained to tell why that weakness exists or how you should fix it, we know how to provide extra energy or support for those areas via sound. A return to normalcy is achieved in 90% of our cases where the client follows tone formulas and other energy building suggestions [4].

Thompson-Liu claims that the test can detect “imbalances” throughout the body: During a radio interview, she said, “We actually see the whole body, as if we were taking an x-ray or a hologram of the whole entire body including your mind and your emotions.” She further said that the device can give a much more complete diagnosis or prognosis than would be expected from a medical doctor [1]. The “imbalances” are said to be correctable by using “sound formulas,” applying “lymphatic patches” that detoxify the body, making nutritional or dietary changes, and/or seeing someone to work on emotional changes. Sound formulas are created on a special tone box. The client chooses which one feels the best, listens to it at home for about 45 minutes a day for a month, then returns to the practitioner for reassessment [5]. The patches, which are most often applied to the feet, are said to contain herbal ingredients that can reduce toxin levels in the body [6]. Gardner’s fee for testing is $65 per session.

Thompson-Liu offers a training course for practitioners and patients for $1,295, with a $100 discount to Nature’s Sunshine and Young Living distributors. (These are multilevel companies that sell herbal and aromatherapy products.) In 2007, the VoiceBio Web site stated that there were 1200+ certified practitioner in the United States and others in 12 other countries. The FDA’s 510(k) database does not list the VoiceBio device, which means that it lacks FDA clearance for marketing in the United States.

Why I Am Skeptical

The Australasian Society of Clinical Immunology and Allergy has concluded that “there is no scientific rationale for this technique, and no evidence that results are useful for diagnosing any disorder.” [7] I agree:

Even if the proposed mechanisms were valid, identifying relationships between sound components and health problems would require correlating VoiceBio findings with the medical histories, physical findings, and treatment outcome of hundreds of thousands of people with the full gamut of disease. I see no published evidence that this has been done. The “evidence” offered on VoiceBio sites consists of a few testimonials.