Look through rose-colored glasses and you are supposed to have an optimistic view of the world. Change the tint of one lens to blue, the other to brown and you have a new twist on dieting gimmicks. A Little Rock, Ark., optometrist invented just such a gimmick, called Vision-Dieter glasses. According to the inventor, Dr. John D. Miller, people wearing his two-toned glasses just two hours a day could control their appetites and lose weight. 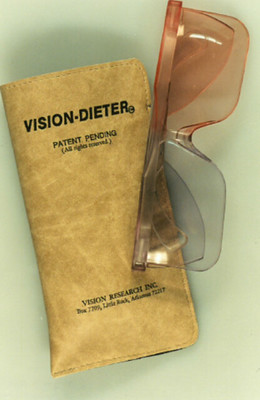 FDA viewed the matter differently. The weight-loss claims were false and misleading, the agency said, and the glasses were unapproved medical devices.

Investigators at FDA’s Little Rock office learned about Vision-Dieter glasses through ads Miller placed in a number of local newspapers. He claimed that the tinted glasses created “a very low-level confusion in the subconscious” that is translated into a rejection in the conscious. This rejection allowed the individual to refuse what he wanted to refuse, such as food, cigarettes and coffee.

The optometrist said he developed his glasses after observing how food companies use colors to attract shoppers to their products. He reasoned that if consumers could be controlled with color, they also could be de-controlled with color. The glasses, which sold for $19.95, were to be worn in the morning and afternoon-but, strangely enough, not during meals.

Promotional literature for Vision-Dieter glasses showed a picture of Miller holding a copy of “independent laboratory tests which confirm the results of his amazing new discovery.” The tests, conducted by McKenzie Psychological Services, involved only 42 subjects, divided into two groups. One wore the tinted glasses and the other wore similarly framed, non-tinted glasses two hours a day for 20 days. Miller’s promotional literature mentioned only the “safety” results of the tests. Effectiveness was not noted.

The FDA investigator visited Miller in September 1982 at his Jacksonville, Ark., Vision Center, an office devoted solely to the handling of Vision-Dieter sales. The doctor would not answer any questions or accept the Notice of Inspection. His attorney, who was present during the inspection, said that to do so would be an admission that the glasses were medical devices. He also said Miller would not register with FDA as a medical device manufacturer.

Subsequently, FDA recommended that Miller’s stock of tinted glasses be seized. In December U.S. marshals removed 652 pairs of glasses from the Vision Center. The attorney asked the court to return the glasses, saying Miller would not use them as diet aids, but only as protective eyewear. FDA, however, said returning the glasses would not be in the public interest, particularly since they had been advertised as far away as Dallas.

In January 1984, the U.S. District Court, Eastern District of Arkansas, ordered the destruction of all but 75 pairs of the diet glasses. These FDA kept for education concerning quackery.

This article was originally published in the September 1984 issue of FDA Consumer magazine.