Whenever the flu season nears, prudent consumers get immunized against the most virulent strains of flu that are expected. This is especially recommended for people who are elderly or have chronic lung disease, diabetes, or various other chronic diseases. In France, however, lots of people arm themselves against this by taking Oscillococcinum. What a strange name! Where does it come from, and what does it mean?

Oscillococcinum was discovered by Joseph Roy (1891-1978) [1], a French physician who was on military duty when the Spanish flu hit the world in 1917. He examined the blood of victims and found a strange microorganism: a bacterium that consisted of two unequal balls that performed a quick vibratory motion. Roy called them “oscillococci” and thought they could vary much in size. Sometimes they shrunk so much that he couldn’t see them with his microscope. But they could also grow and get one or two more balls. 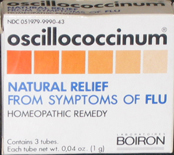 Next Roy discovered these bacteria in the blood and the tumors of cancer patients, in syphilitic ulcers, in the tubercles of tuberculosis patients and in the pus of gonorrhea sufferers. Also people who had eczema, rheumatism, mumps, chickenpox and measles turned out to harbor this “universal germ.”

It is not clear today what Roy saw through the eyepiece of his microscope. But one thing is certain: he did not see the causes of those diseases. Rheumatism, eczema, and most forms of cancer are not caused by microbes, and mumps and measles are caused by viruses, which can’t be seen with an ordinary microscope. Moreover, no other bacteriologist has ever reported seeing Roy’s special cocci again.

Roy thought he had made a new and thrilling discovery on the road to the cure for cancer. He even wrote a book about it. In his time, many people doubted the idea that every disease has its own cause (such as its own microbe). Such skeptics embraced Roy’s discovery.

Roy thought immediately of a homeopathic application. The fundamental teaching of Samuel Hahnemann (1775-1843) is that disease is a disturbance of “life force” and that specific causes for diseases do not exist. Possibly vague environmental factors may play a role, he thought, and his idea was that scabies and syphilis were such factors, which he called “miasmas.” Hahnemann first published his views in 1796. Other parts of Hahnemann’s views were that diseases can be cured if one imparts to the patient an artificial disease that produces similar life force disturbances as the real disease. The short-lived artificial disease will drive out the real disease and then the patient is cured. The remedies act by their spiritual power and this spiritual nonphysical power can be imparted to alcohol or milk sugar by a process of shaking or rubbing, just like iron can be made magnetic by rubbing it with a magnet.

Roy’s finding fit perfectly with the homeopathic view that diseases do not have specific causes, and he thought that his discovery could be adapted to treat cancer homeopathically. Just take any abundant source of oscillococci, and after homeopathic reinforcement, it will become a panacea. Now oscillococci occur virtually everywhere, but for reasons nobody knows Roy took as source the muscovy duck, which French cooks use to prepare duck breast. These cooks call the animal Canard de Barbarie, but biologists know it as Cairina moschata. Completely in line with the unscientific traditions of homeopathy, Oscillococcinum is denoted in Latin with the wrong name, “Anas Barbariae, Hepatis et Cordis Extractum,” even though Anas ducks are quite different from Cairina ducks.

Since 1925, Oscillococcinum has been prepared as follows. Into a one litre bottle, a mixture of pancreatic juice and glucose is poured. Next a Canard de Barbarie is decapitated and 35 grams of its liver and 15 grams of its heart are put into the bottle. Why liver? Doctor Roy writes: “The Ancients considered the liver as the seat of suffering, even more important than the heart, which is a very profound insight, because it is on the level of the liver that the pathological modifications of the blood happen, and also there the quality of the energy of our heart muscle changes in a durable manner.” Maybe the French tendency to call any form of not well-being a “crise de foie” (“bilious attack”) had also something to do with it. After 40 days in the sterile bottle, liver and heart autolyse (disintegrate) into a kind of goo, which is then “potentized” with the Korsakov method.

Semyon Nicolaevich Korsakov (1788-1853) was a modest landowner in the village Tarusovo near Moscow [2]. After 1813, he held a not-too-demanding desk job in the Ministry of Internal Affairs, enabling him to dabble in lay medicine. In about 1829, he converted to homeopathy and invented a quicker way of preparing high dilutions. The glass containing the remedy is shaken and then just emptied and refilled, and the dilution factor is assumed to be 1:100.

In ordinary homeopathy one has to use a new clean glass for every dilution, so the Korsakov method is very cost-effective. In preparing Korsakov potencies, distilled water is used rather than alcohol (sometimes only after the 30th dilution), which saves a lot of money if one has to repeat the dilution step 200, 1000 or even 50,000 times. Oscillococcinum’s manufacturer (Boiron) uses “ultrapure water” from the first step on. Oscillococcinum is designated as “200K”—which means that the original amount is subjected to 200 Korsakov dilutions—and the resulting fluid is used to moisten small 5 milligram balls of milk sugar. Some packages have been labeled “200CK.” (“C” is the abbreviation for centesimal, which means 1-to-100 dilution, and “CK” stands for “centesimal Korsakovian.” ) Other packages have been labeled 200C,” which does not specify which dilution method was used.

Korsakov’s first name is often incorrectly transcribed as Semen, and some biographers use the nonexistent first name Iseman or Isemen. In German transcription he is Simon Korsakoff. Various myths say that he was a nobleman or count, a physician with or without PhD, the czar’s personal physician, or even a general who invented the Korsakov method on the battlefield. None of this is true. Hahnemann addressed him as “Monsieur le comte de Korsakoff” in a time that foreigners customarily used noble titles for any Russian who could speak French. Korsakov’s method gained Hahnemann’s approval in 1832.

The good doctor Roy thought that his concoction worked against cancer, syphilis, scabies and tuberculosis, but Boiron only recommends it for “flu-like states” and asks just over a dollar per gram for it. Hundreds of thousands of French buy this energetically advertised nonsense product. It is recommended for prevention (one dose per week in the flu season) and as cure. And, contrary to classical homeopathic usage, one has to gobble up a one-gram doses, rather than take a single 5 mg ball as a lifetime dose.

There’s no logical reason to believe that anything in duck liver or heart will be an effective flu remedy. But even if there were some magic substance, the manufacturing process guarantees that it will not be in the finished product. The laws of chemistry indicate that after the 12th dilution, it is unlikely that a single molecule from the original organs will remain. Moreover, at “200C” (or “200K” or “200 CK”) the concentration of the original substance would be 1 part in 100200, which is a 1 followed by 400 zeroes. A 1 followed by 100 zeroes is called a googol. The estimated number of particles in the universe that we can see is a googol, give or take a few zeroes. So in order for one of the original molecules to be present in a container of Oscillococcinum, the mass of that container would have to be about a googol googol googol times our world, which would be incomprehensibly larger than the visible universe.

How, then, could anyone conclude that Oscilloccinum is effective? Homeopathic theory holds that if large amount of a substance can produce symptoms in healthy people, infinitesimal amounts can cure diseases with those symptoms. The alleged effects are determined through experiments (most done over 100 years ago) in which people ingest the substances and report what they experience afterward. These reports have been compiled into huge books that supposedly provide the “drug picture” of each substance. The books, called materia medica, are said to comprise “all the recorded mental, general and local (particular) symptoms and signs, modalities, pathological changes and test findings” for each substance.” [4]

That’s about half. The rest include:

Do you believe that any product can provide such wide range of benefits? I certainly do not!

Dr. Nienhuys is a retired mathematician, formerly at Eindhoven University of Technology in The Netherlands. He is also secretary of the Dutch organization Skepsis. An earlier version of this article appeared in the organization’s magazine, Skepter. .