An administrative law judge has ordered the marketers of the “Ab Force” belt to stop claiming that the device causes or promotes weight, inches, or fat loss; causes or promotes well-defined abdominal muscles; or is an effective alternative to regular exercise [1]. On September 15, 2004, in a 73-page report, Chief Administrative Law Judge Stephen J. McGuire upheld a Federal Trade Commission complaint charging Telebrands Corporation, TV Savings LLC, and their owner, Ajit Khubani with unfair or deceptive acts or practices and false advertising [2]. The Fairfield, New Jersey-based operation marketed the belt, which is an electronic muscle stimulation (EMS) device that causes muscles to contract involuntarily.

The product included: (a) a black elasticized belt, (b) a thin black pad measuring approximately 8 inches by 4 inches, and (c) a small control unit, powered by a coin-sized battery, which attaches to the pad and, in some models, enables the user to control the intensity of electronic stimulation. These components assemble to form a belt with the pad and unit in the middle. Users are instructed to apply a water-based gel to the pad and place the pad against the abdomen, bicep, or thigh to send the body the electrical current generated by the control unit. Frequent use of the device would require the purchase of additional batteries and gel. 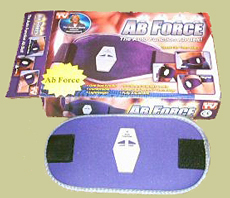 Muscle stimulators are legitimate medical devices approved for certain conditions—to relax muscle spasms, increase blood circulation, prevent blood clots, and help rehabilitate muscle function after a stroke. However, they do not dissolve fat or stimulate muscle-building. Many health spas and figure salons claim that muscle stimulators can remove wrinkles, perform face lifts, reduce breast size, reduce a “beer belly,” and remove cellulite. The FDA considers their promotion for any type of body shaping or contouring to be fraudulent [3,4].

In 2003, the FTC charged that the Ab Force marketers had falsely claimed that users could achieve weight loss, fat loss, and inch loss and get well-developed abdominal muscles and that use of the belt is an effective equivalent to regular exercise [5]. The FTC’s complaint stated that between December 2001 and May 2002, the Ab Force was promoted with 60- and 120-second television commercials, Internet advertisements, radio advertisements, and print advertisements. During this period, these infomercials appeared more than 10,000 times on cable, satellite, and broadcast television outlets and were among the most frequently aired commercials on cable television. The product cost $10, but sales of additional batteries and gels during that period boosted total sales over $19 million. The advertisements claimed that the Ab Force used the same technology and was just as powerful and effective as more expensive EMS devices (AbTronic, AB Energizer, and Fast Abs Exercise Belt) that were advertised on program-length infomercials during or shortly before the time period in which the Ab Force commercials appeared. However, the longer infomercials were similarly deceptive and triggered FTC action [6,7].

The administrative law judge concluded that the Ab Force advertisements were “likely to mislead consumers, acting reasonably under the circumstances, in a material respect.” If not appealed or modified within approximately 30 days, the judge’s order will prohibit Khubani and his companies from making unsubstantiated claims that the Ab Force or any substantially similar device (a) causes or promotes loss of weight, inches, or fat, (b) causes or promotes well-defined abdominal muscles, or (c) is an effective alternative to regular exercise [1].

The FTC has taken other actions against Khubani. In 1990 and 1996, the Commission obtained consent judgments prohibiting him from violating the Mail or Telephone Order Merchandise Rule (Mail Order Rule). The 1990 case, which involved failure to make timely delivery of merchandise, included a penalty of $30,000 [8]. The 1996 case, which involved unsubtantiated claims for a television antenna and a hearing aid, required payment of $95,000 [9], but the FTC later modified the 1996 consent judgment and obtained an $800,000 penalty [10,11].