In August 2003, Reginald Harold Fenn, 74, of Port Stephens, Australia, was found guilty of manslaughter in connection with the death of 18-day-old Mitchell James Little who was born with aortic stenosis — a structural heart defect that surgery can repair. During a nine-day trial, witnesses testified that Fenn had treated the baby in 1999 with herbal drops and a “MORA Machine” and declared that he was cured. He recommended that parents, Michael and Elizabeth Little, not allow their baby to undergo surgery. Mr and Mrs Little then canceled an appointment at Westmead Hospital where Mitchell was to be evaluated for an operation to repair or replace the narrowed aortic valve that was putting pressure on his enlarged and overworked heart. The appointment was rescheduled after doctors intervened, but Mitchell died of heart failure before an operation could be carried out [1]. 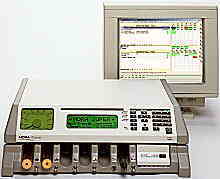 Michael Little was a patient of Fenn for 15 years. Elizabeth Little testified that Fenn had put two metal cylinders on the baby’s legs and attached them to a machine. She also he said Fenn told them it would supply energy to the body and cure Mitchell’s heart problem and that he had cured “hundreds with a similar condition.” A cardiologist testified that he had called Fenn who claimed to have found a different heart condition and cured it as well as the aortic stenosis.

The government charged that Fenn had been negligent and failed in his duty of care to Mitchell by treating him when the problem was beyond his area of expertise. Fenn’s defense counsel argued the parents’ decision to postpone the appointment was not prompted by Fenn, but by a desire to spend more time bonding with the baby—time they believed they had, based on what doctors had told them. The jury issued a guilty verdict.

In February 2004, Fenn was sentenced to five years in jail, but the judge suspended the sentence because Fenn was hospitalized with cancer and said to be too ill to serve the time in jail [2,3].

The MORA machine is claimed to detect and modify the patient’s electromagnetic vibrations to cure whatever is wrong. Its manufacturer states that the “inharmonious component of the acupuncture meridian energy/ information is lessened or eliminated — the result is that acupuncture points tend to normalize.” [4]

The Occidental Institute Research Foundation, a Canadian company that markets the MORA and similar devices, states:

MORA-Therapy is an all-encompassing assessment and treatment modality utilizing a patient’s own “ultra-fine electromagnetic oscillation.” The method had its inception in 1977 after development by the German physician Dr. Franz Morell and electronics engineer Mr. Erich Rasche from whose names the name MO-RA originated.

During more than 20 years of research, carried out by well known scientists in Germany and abroad, it was found that each individual possesses a unique spectrum of ultra-fine electromagnetic oscillations which can be electronically sensed, processed and then utilized as therapy.

Today, it is known that the chemical processes in the bodies of humans and animals are controlled by the “information” carried by and within these oscillations. Furthermore, organs and cell types possess characteristic oscillation spectrums which are at the same time unique to each individual. The electromagnetic oscillations referred to in MORA-Therapy may be compared to (but are different from and much finer than) the cardiac impulses detected by an electrocardiogram (ECG) or brain “waves” as measured by an electroencephalogram (EEG). [5]

It would be more accurate to describe the MORA as a fake whose practitioners are either dishonest, delusional, or both. This case illustrates the extreme degree of risk associated with use of such devices.