The Monterrey Wellness Center—previously called the Davidson Cancer Clinic—was an outpatient facility operated by James Gary Davidson in Monterrey, Mexico, that was falsely claimed to have a very high cure rate for cancers. According to its Web site:

The therapy has proven effective in a wide variety of cancers, including breast cancer, brain cancer, lung cancer, bone cancer, skin cancer, prostate cancer, cancers of the stomach, liver cancer, colon cancer, pancreatic cancer, leukemia, all of P-53 gene category cancer. The patient is asked to undergo two treatments a day for an amount of time to be determined after doctor’s diagnosis. The treatments consist of lying on a table similar to getting an MRI or X-ray. . . .

A world renowned scientist has developed a scanning method of locating the cancers in a person’s body by focusing on a specific protein found in cancer. Then, by directing a specific electromagnetic frequency [similar to a radio wave] at the cancer cells, the cancer cells implode in the body. Once the cancer cells are killed, the dead cells and matter are absorbed and excreted through normal body processes. These proteins can be detected and measured in the patient’s urine, although the clinic does not conduct measurements. There are no chemicals introduced to the body, and this cancer treatment is absolutely non-invasive with no side effects [1]. 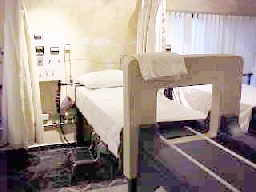 To receive the treatment, the patient lay on a table inside a “treatment ring” that created a magnetic field for up to a hour, twice a day. The cost was US$17,500 plus Mexican taxes of US$2,625. These figures did not include travel costs, hotel, food, and other incidental expenses.

The site also claimed that “people have come to this Clinic with inoperable cancer and have left with the cancer completely cured.” Although the Web site did not directly advise whether to give up standard treatment, it encouraged women diagnosed with breast cancer to “consider coming before having any surgery, because CT scans done before and after the Clinic’s treatment have shown clearance of the cancer.” [2]

There is no reason to believe that any of the above claims of effectiveness were true. There is no scientific evidence exposure to magnetic fields is effective against cancer, that cancer cells respond differently than normal cells to a magnetic field, or that the magnetic field produced by the clinic’s device can cause any cell to implode.

The magnetic resonance imaging (MRI) devices used for medical diagnosis use radiofrequency waves, a very strong magnetic field, and a computer to produce cross-sectional images of the body. The patient is placed inside a large magnetic coil. When the magnetic field is turned on, it causes hydrogen nuclei (protons) within the body to line up in one direction. Then selected radiofrequency waves flip these particles in another direction. When the waves are turned off, the particles realign, releasing an electromagnetic signal that the computer translates into an image. The procedure produces no known permanent effect on cell structure or function. It may show the presence of a cancer by producing shadows that represent tumor masses. But it cannot detect any difference between normal and cancer cells at the cellular level.

If magnetic fields were capable of killing cells, MRI devices might seriously damage the patient’s body. Furthermore, even if powerful magnetic fields could kill cancer cells, there is no reason to believe that the clinic’s device—which had a much weaker magnetic field—could have had the same ability.

Because cancers frequently recur, cancer survival statistics are usually expressed in terms of 5-year follow-up. Thus, even if a procedure can cure, it would not be possible to know the outcome without following the patient’s status for many years. Thus the clinic’s claim that people were completely cured before they left was not credible. In addition, there was good reason to conclude that clinic owner, James Gary Davidson, was not trustworthy.

In 1980, when Davidson lived in Michigan, he made local headlines with claims that he had invested a way to change water into “hydroziene,” a fuel that allegedly delivered nine times the mileage of propane used in trucks. The Grand Rapids Press reported that Davidson had claimed to have a doctorate in nuclear physics from Ohio State University, a master’s degree in microbiology from Ohio University, and a bachelor’s degree in mechanical engineering from Southern Illinois University. However, officials at Ohio State and Ohio University told the reporter that they were unable to find any record that he had attended these schools, and a Southern Illinois official reported that a James Davidson had attended for two semesters at age 17. Although Davidson’s patent attorney said that Davidson had said he had worked for the Atomic Energy Commission, a personnel official at the Department of Energy said that Davidson had never worked for the Commission. The newspaper report indicated that investors had sunk $625,000 into a Davidson-run company that supposedly was studying the fuel, but they had received no test results [3].

In 1992, Davidson was named as a defendant in a civil suit that charged  that he and others conspired to defraud investors in a company called Adtech [4]. Davidson settled with the plaintiffs in 2005, but the court records do not contain the settlement details.

In 1994, Davidson was charged with four counts of securities fraud by selling shares in a plan to develop a synthetic fuel called Chasoline. The criminal information accused him of falsely claiming that (a) he had a Ph.D. degree, (b) “Chasoline”—supposedly made from corn, coal, and water—was better than gasoline, (c) he would build a plant in Illinois to manufacture the product, (d) the licensing for “Chasoline” had been  sold to the Tennessee Valley Authority [5]. Press reports indicate that he  had allegedly bilked about 25 investors out of $45,000 and promised to employ 1,200 people at the manufacturing facility [6]. After pleading guilty to one count of fraud, he received an 18-month conditional discharge and ordered to pay restitution of $19,425 plus fines and court costs [7].

In 1994, Davidson and the company that was supposedly developing Chasoline were accused in a civil suit of borrowing a new tractor, claiming ownership, and trading it in to purchase a different one [8}. The bill of sale was attached to the complaint. I do not know the outcome of the suit.

In 1996, the state accused him of violating the terms of his plea agreement by practicing medicine without a license in Tennessee—using a device claimed to alleviate pain in cancer patients. He then negotiated an agreement in which his conditional discharge was extended by six months and he was fined $6,000 plus $784 for costs [9].

In June 2000, Davidson, five others, and Macrotech (a corporation he founded) were charged with criminally defrauding clinic patients and investors in the corporation [10]. The 63-count indictment stated:

In March 2002, Davidson pleaded guilty to one count of money laundering and one count of mail fraud. The other five defendants had their charges dismissed as part of Davidson’s plea agreement. Davidson faced a minimum sentence of nearly six years in prison, a $500,000 fine, and an order to pay $675,000 in restitution [12]. On September 13, he paid the restitution and was sentenced to 88 months in federal prison plus 2 years of supervised release. He was released on March 17, 2009.